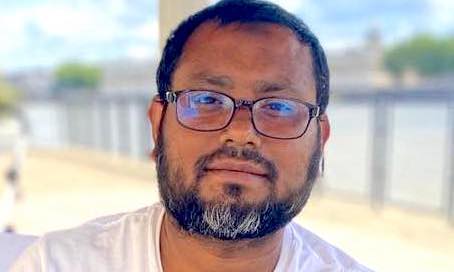 ‘My dad had a vision for us to do well: to get good education and a good job,' said Maium.

Maium remembers Bangladesh being overcrowded as a child. His initial experience of the UK was completely the opposite.

‘Everything was different. It was beautiful and nice. It was very different from the country I was born in. Obviously, I was very young at the time. In Bangladesh, I was use to being with Bangladeshi people. When I came here I see a different variety of people.’

Maium came to the UK in 1984. He was 5 years old. Having lived in various temporary accommodations  in many parts of London, his family then settled in the  Isle of Dogs. They were the first few Bengali families moved in to the area at the time.

RACISM IN ISLE OF DOGS

They lived near a park. They would not go to the park for five years because of fear of  beaten up by white racists.

‘I got beaten up a few times. During the 1990s, I was  a secondary student, we had the BNP and Derek Beackon, for example with his union flag, marching through the Isle of Dogs. We were very scared at the time.’

‘We had racists outside our schools. There was so much tension in the community.’

He had the opportunity to volunteer at a youth club, just like the new generations of Bangladeshis, and developed his experience in community and youth work.

‘I am still doing community work. We became the mentors for the generation coming after us. My key moment was me taking the opportunity as a youth worker.’

‘Everyone called me Mr Councillor. Because I was involved in the community I was already working for the local people. In 2010, the local community approached me. I took on the role.’

He explained about the party political issue that he had to deal with. There are also conflicts outside of the party. He just carried on working for the benefit of the community regardless of the conflicts which may have arisen.

He goes on to say that:

’It is about asking yourself - have I done the right thing for my residents? Can my people approach me? If somebody needs me, have I been there for them? I have always been a grassroots person. I believe people still miss me, That gives me satisfaction.’

Just before the first lockdown Maium kept on doing community work. He would talk to people, campaign for his local residents, go to meetings and organise events.

‘Suddenly everything stopped. You have to listen to guidelines. Someone is now controlling your lifestyle. That was so difficult at first! I was still busy helping the community, helping people with their medication and food supply. My kids were complaining that I was putting myself at risk. My parents were calling me to say why you were going out.'

He was also scared of catching the virus.    When he would come home, he would take off his clothes straight away and have a  shower to clean himself to make sure he was protecting his family.

‘I had someone called from Barts Hospital, Whitechapel. He did not know whether he had the virus. He asked me to phone the hospital. They are not telling him anything. They have isolated him in a room. The following day he passed away. We could not see him. So many people passed away. We did not know about the virus at the time.’

‘I lost my father-in-law who lived in America. I also lost people near my locality.’

Since February 2020, he has identified the need for food banks in the locality. Initially he had provided food packages to over 150 resident per week.  Throughout the lockdown he had continued doing it. So far he delivered over 35000 food packs.

‘People could not come out of their home.  Their carers did not attend their home to look after them. We tried as much as we can to get to the local community by providing food.’

Maium felt that the pandemic has brought different sections of the community together to defeat the virus.