December 24, 2021
We must not forget that according to the current government's report - Covid Disparities Report 2021- published on 3 December 2021 that 91.7% of Bangladeshis in London have already taken the vaccine. This group is therefore the highest vaccine taker compared to any other ethnic group in London.
BritBanglaCovid would like to say thank you to everyone who have played their part.
We still have a way long way to go. We just need to make sure we carry on with the campaign and call for the take up of the vaccine to everyone. There are still a million Londoners who have not yet taken the vaccine. We must not forget other minority communities too.
MERRY CHRISTMAS AND A HAPPY NEW YEAR! 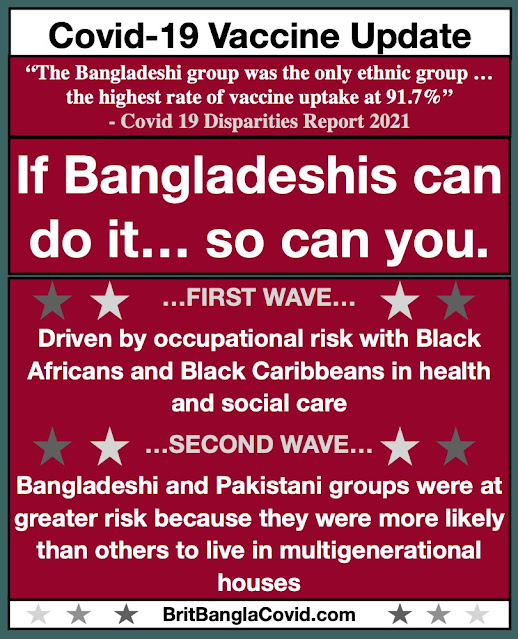 January 16, 2022
In memory of her dead son, Hasina Momtaz  spreads the message of  hope and paradise  after life through jewellery design to connect with Muslim community during pandemic. Early life in London Hasina came to the UK in the mid 1970s. She settled in Croydon, south London, from Bangladesh. She could not speak a word of English and was being bullied at school. ‘I remember nobody wanted to be my friend and the teacher assigned somebody to be my friend to look after me and make sure I was okay.’ Although she made south London her home, there was something unsettling for Hasina as a teenanger. ‘So   from the age of that 16, 17, I almost felt like I was on borrowed time because the school that I was at there were three or four Bangladeshi girls who all got taken out of school at the age of 16 and ...actually shipped back home… and married off there against their will.’ She confessed that she also felt the pressure from her father to get married. ‘I was determined that at least I was going to go
1 comment
Read more